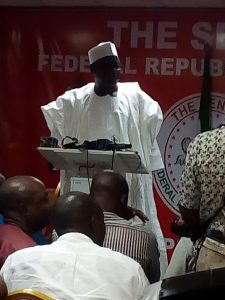 The Senator said the APC cannot impose leadership on leaders – Ndume said he would represent the interest of the northeast Trouble is brewing within the All Progressives Congress (APC) as Senator Ali Ndume has vowed to contest for the position of Senate presidency despite the party’s endorsement of Ahmad Lawan. The lawmaker spoke on Wednesday, May 8, where he said he deserves to be Senate president just like every other interested persons. Ndume noted that the north-east geo-political zone has been considered for Senate presidency position noting that the region is the most ravaged by Boko Haram.

Senator Ndume said: “My mission for the Ninth Senate is not personal. It is part of what we need to do in the polity of this country. First of all, it is wrong for leaders to be given a leader from amongst themselves. “They are supposed to decide who among themselves is supposed to be their leader. And that also is taken care of by the Constitution of the Federal Republic, Section 50 (1). It is very clear as to how the Senate leadership should emerge. But let me quickly add that is not to say that I think I am more qualified to be the Senate leader. I am not better than them in any way. Most of them were born with silver spoon, I came up from a very poor background. “I am a human being that has rights guaranteed by the Constitution of the Federal Republic of Nigeria which I font compromise. Even before I threw my heart into the ring for the Senate Presidency seat, my people called on me to throw my heart for the position. And I did for many reasons. One, I feel I am qualified. Two, I feel I should be given the chance. Three, the zoning was made to North East deliberately because of the precarious situation that we find ourselves. “The insurgency has inflicted N9.2 trillion destruction on the North East. And you need somebody who knows where it pinches. We in Borno are in the epicenter of the Book Haram destruction. So it is not like what you will get from the Office of the Senate President but what you can do with it. If you are the Senate President in this country, you will be able to globetrot around, tell people how the problem is because you are in the heart of the problem. You know how it is. “So, if this opportunity is given to us, we have three critical issues in Borno particularly and the North East in general. “One is the issue of recharging of Lake Chad, which should be taken globally by somebody that knows it, somebody that can explain better to the people. Two, the issue of insurgence as I said, had inflicted a N2.7 trillion damage on us. If we are to go by monthly federal allocation and the budget of the state, it will take us ages. “Right now, you can rightly say that Borno is a failed state. And the only way to bring it back is to have a way. And part of it is because I know and my passion for it because it affects me directly. Right now as I am speaking to you, I cannot comfortably drive to my local government. It has no light now because it is no connected. It has no telephone because the insurgents have destroyed the equipment. The ecosystem is destroyed, our schools are closed. “Secondly, I have been in this place for quite a while. The Senate was intended to be a stabilizing institution in the polity. When we came in, the senators were not doing much. I was inside House of Representatives then, we provided the advice and they took less of things like motions and all that. And they were going the senatorial job. Gradually, this is drifting. And we have gotten to a point now where from outside, a Senate President will be imposed on senators. ”I am glad that the party after doing that announcement realized that it was wrong and unconstitutional. Even the party supremacy that they are talking about, in Article Two of the APC Constitution, it says that subject to the provision of the constitution, the APC will provide services to the government. And Section 50 of the Constitution is very clear about emergence of the leadership.

“Besides, in all the emergence of candidates of APC, there is no provision for imposition. The president emerged through a democratic process. And the election was open, it was zoned in line with the Constitution. Even then, Rochas Okorocha contested and he was not disciplined. Buhari contested with Atiku, Kwankwanso and the others.” Meanwhile, Legit.ng earlier reported that the candidature of Senator Ndume for the presidency of the 9th Senate, on Sunday, May 5, got the blessings of Northeast Elders and Stakeholders Forum. In endorsing Ndume for the position, the group stated that his credentials trounces that of all others vying for the position.