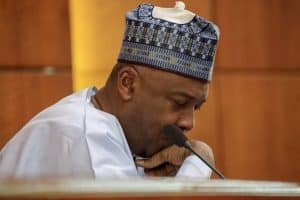 President Mohammadu Buhari has written the Senate today  requesting for confirmation by Senate Mr. Godwin I. Emiefele for re-appointment as Governor of Central Bank of Nigeria for a final term of (5) years.

Nassnews could recall that Mr. Godwin I. Emiefele’s tenure as the Governor of Central Bank of Nigeria for five years expires on June 2nd 2019. The letter was received and read on the floor of the red chamber by the Senate President, Senator Olubukola Saraki.

The distinguished senate is expected to consider and confirm the nominee in the usual expeditious manner.