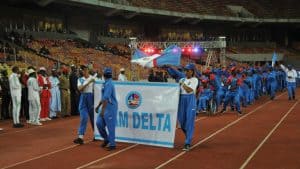 As parts of the veritable instruments for discovering potentials and fostering peace among the youths in the Niger Delta region , The Ministry has disclosed that it will launch the Niger -Delta Sports Festival in 2020 .

This was disclosed by the Permanent Secretary, Mr Adesola Olusade during the courtesy visit of the Foundation for Partnership in the Niger Delta (PIND) , led by the advocacy manager. Mr.Chucks Ofulure, on Thursday 25th , January 2020 in Abuja

Mr Adesola noted that, there are limitations to what the Ministry can do in addressing the situation in the region, hence its decision to take a second look at the Niger Delta Action Plan (NDAP), Niger Delta Master Plan and harmonise both with the Ministry intervention programme to avoid duplicity and increase support for the critical areas to improve the lives of the Niger Deltans.

Speaking further, he explained that the Niger Delta Development Commission (NDDC), and other intervention programmes initiated by the Government is to address different activities of the Niger Deltans, which other Non-Governmental Organizations (NGO), are also partnering with government to assuage.

He said the skills acquisition centers have been massively developed across the Nine States of the Niger Delta area in three major aspects of Oil and Gas, Commerce and Agriculture. The Ministry also hope to complete and equip them so that they can be utilized for the skills acquisition programmes and therefore appealed for intervention support from the NGO’s in these areas.

Earlier, PIND Head of delegation, Mr. Chucks Ofulere reiterated that as development partners with MNDA, the organization working vision for the Niger Delta is to help in the development of the region to promote equitable economic development and peace through partnership in the Niger Delta.