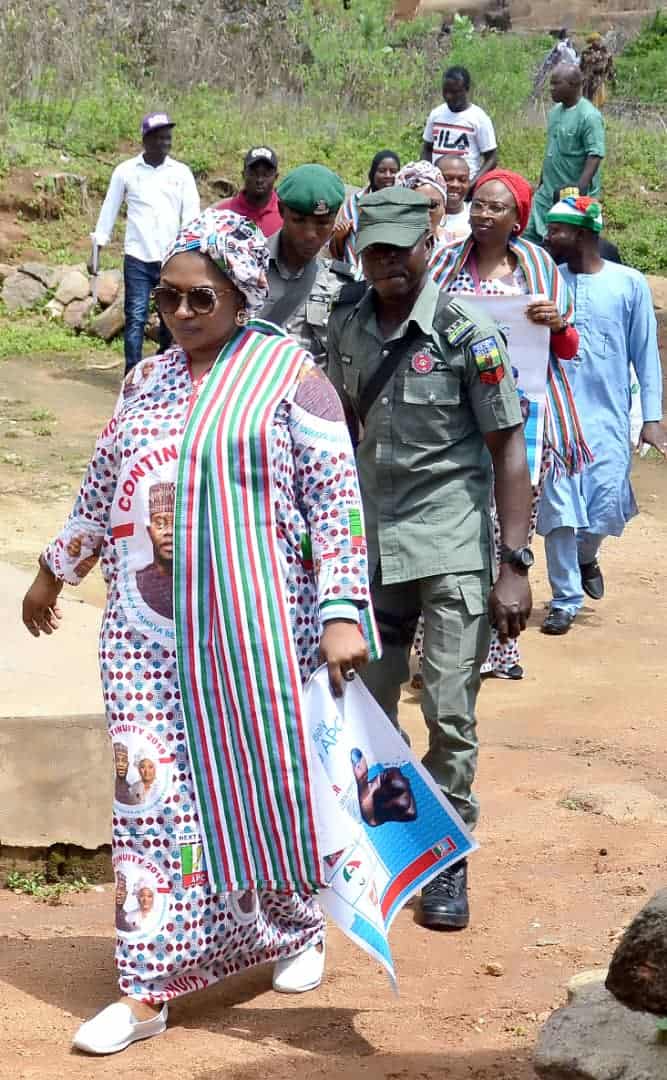 Wife of Kogi Central Senator, Hajiya Rekiyat Oseni has commenced intensive campaign activities for the re-election bid of Governor Yahaya Bello and his Deputy, Chief Edward Onoja of the All Progressives Congress (APC).

In order to ensure high participation of voters in the November 16th polls, Hajiya Rekiyat took voter education and awareness campaigns to the hinterlands across the five local government areas of Kogi Central Senatorial District.

While flagging off the activities in Okene Local Government Area yesterday, Hajiya Rekiyat who has hitherto engaged in series of empowerment activities in the area and visits to hospitals, said it is imperative to create more awareness on the need for the people to be well informed about their civic responsibilities and equally enlighten them on the need to support the continuation of Governor Yahaya Bello’s administration.

“We observed that in most elections, voters in the rural areas are not always well informed of the candidates in the contest and how to go about voting. We are all out today to educate and enlighten them about the lofty policies of our great party, the APC, which Governor Yahaya Bello has been implementing in the last four years.

“It is our obligation to inform the people in the rural areas not to mortgage the future of unborn generation by voting a party that plunged our state into abysmal economic/political conditions before Governor Yahaya Bello divinely came for the rescue,” she enlightened.

At Iruvuochinomi, Iduka, Okene-Eba, Uhuodo, Obangede and Nagazi-Uvete, the Senator’s wife who was overwhelmingly received by excited supporters, affirmed that percentage of invalid votes occasioned by lack of awareness will drastically reduce in the forthcoming election, just as they pledged to give block votes to the joint ticket of GYB/CEDO.

They were equally appreciative of the donations and distribution of food items, a gesture which Hajiya Rekiyat declared would be a continuous one.

Senator Oseni decries PDP for breach of security, urges constituents to be conscious