SMEAR CAMPAIGN AND MUDSLINGING AGAINST THE PERSON OF HON. BAGO: A DEFENCE

SMEAR CAMPAIGN AND MUDSLINGING AGAINST THE PERSON OF HON. BAGO: A DEFENCE 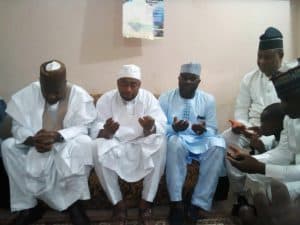 Hon. Mohammed Umaru Bago Campaign Organisation, in a press release signed by it’s Spokesman, Hon. Victor Afam Ogene, on June 4, 2019 wish to state that, attention has been drawn to a feeble attempt by desperate persons aimed at derailing Hon. Umaru Bago’s principled quest for equity, justice and fairness in electing principal officers of the National Assembly, particularly the House of Representatives.

Coming under the guise of a judicial inquest into the decade long sparkling career of Hon. Bago – spanning through three banks, including the nation’s apex financial institution – we make bold to state that the action of these desperados would, in the end, only be tantamount to searching for a pin in a haystack.

Although yet to be formally served with any processes in this regard, we observe that the judicial gambit is a last ditch attempt aimed at injecting life into an ebbing campaign of one of the speakership aspirants, who is being haunted by his past profile of proven conviction by the Supreme Court of Georgia for wilfully stealing a client’s $25,000.

Instead of frontally confronting this brutal fact, which is currently the subject of litigation before the Federal High Court, Abuja, they have rather embarked on a voyage of smear campaign and mudslinging against the person of Hon Bago, in the mistaken believe that it would gain for them the traction which endless forum shopping and endorsement trips have so far failed to achieve.

We would be glad to accept service concerning this suit, as we have already instructed our legal team to take it on, on accelerated basis. It is also our charge to our lawyers to commence defamation processes against the purveyors of this mindless falsehood.

This would be in direct opposite to the stance of an ‘anointed’ aspirant who, according to reports, besides evading service since May 24, 2019 when a case was instituted against him, is said to have employed harassment, inducement and falsehood to scare the plaintiff off the case.

Notedly, the current turn of things may well provoke a proper inquiry by the media, governmental agencies, Non-governmental Organisations and the public into the doggy issues of dual personality, multiple dates of birth, social security number fraud and several other infractions which has trailed the said aspirant.

We reiterate that for us at the Hon. Bago Campaign Organisation, we have no baggage to carry, despite devious attempts to foist one on us.

In fact, we welcome an inquest into the ‘past’ and ‘present’ of aspirants to the exalted office of Speaker, House of Representatives.

9th NASS: You can work for any APC candidates – PDP caucus