Senate on withholding of assent 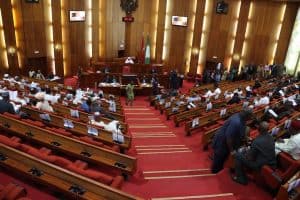 The senate today debates the withholding of assent by President Mohammadu Buhari on the Nigeria Correctional Service Bill.  The motion on withholding of Assent was raised by Senator Ahmad Lawal, leader of the Senate. Nassnews recalls that the president c-in-c had signified the withholding of his assent on the Nigeria Correctional Service Bill pursuant to Section 58(4) of the Constitution of the Fedeeral Republic of Nigeria 1999 (as amended). The Senate notes that the rational for withholding the assent borders on the observation of Mr. President on clause 17(5) and 44(d) of the bill. The Senate is aware that a technical committee of the Senate had worked on Mr. President Observations and re drafted the affected clause. Relying on orders 53(6) and 88(b) of the Senate Rule, the senate unilaterally resolves to rescind its earlier decision on Clause 17(5) and 44(d) of the bill and refer the bill to the committee of the whole for consideration and passage.

TO THE NIGERIAN WORKERS ON WORKERS’ DAY,LET US KEEP HOPE ALIVE AND RE-COMMIT OURSEVES TO THE IDEALS OF SERVICE