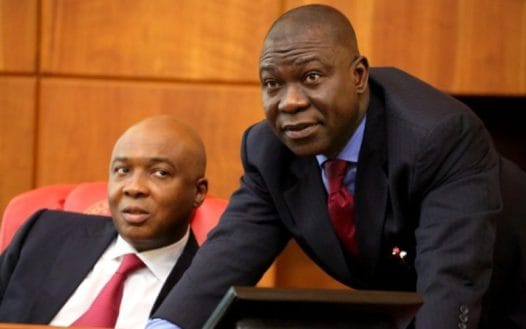 The Peoples Democratic Party (PDP) says it has uncovered a fresh plot to arrest Senate President Bukola Saraki and his deputy, Ike Ekweremadu.

The opposition party made these allegations in a statement by its spokesperson, Kola Ologbondiyan, on Sunday.

Read the full statement below.

The Peoples Democratic Party (PDP) has again uncovered a plot by the All Progressives Congress (APC) and the cabal in the Buhari Presidency to use compromised security agencies and the Economic and Financial Crimes Commission (EFCC) to invite, arrest and detain Senate President Bukola Saraki and Deputy Senate President Ike Ekweremadu.

This is just as the PDP has unraveled fresh facts confirming that the pressure by the Presidency for the reconvening of the Senate is out of a sinister motive and not for any emergency in the approval of the budget of the Independent National Electoral Commission (INEC) for the 2019 election.

The fresh plot to detain the two presiding officers is part of renewed design to keep them out of circulation, ahead of Senate resumption, so as to enable the heavily induced APC senators, who are now in the minority, to throw up two of their members as Senate President and Deputy Senate President respectively on the excuse that Saraki and Ekweremadu failed to show up for proceedings in the Senate.

The PDP notes that the new plot to cage Saraki and Ekweremadu, in devilish rehash of the Tuesday July 24, 2018 hostage-taking and invasion of their official residences by security agencies is coming after the August 7, 2018 failed attempt to use security forces to take control of the leadership of the Senate.