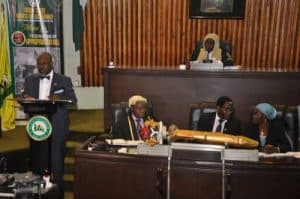 Governor Muhammadu Inuwa Yahaya of Gombe State has issued a proclamation for the inauguration of the 6th Gombe State House of Assembly.

In a press release by Ismaila Uba, Senior Special Assistant (Media and Publicity) to Gombe State Governor, it was expressed that the First sitting holds Friday, 14th June.

This is in line with the powers vested on him by the Constitution as the Executive Governor.

With the proclamation, the 6th House shall hold its first session on Friday, 14th June, 2019.

The Governor acted pursuant to the powers bestowed upon him by Section 105, Subsection 3 of the Constitution of the Federal Republic of Nigeria 1999, as amended and all powers enabling him in that behalf.

The proclamation reads: “Whereas it is provided in Section 105 Subsection 3 of the Constitution of the Federal Republic of Nigeria, 1999, as amended, that the person elected as Governor of a State shall have powers to issue a Proclamation for the holding of the First Session of the House of Assembly of the State concerned immediately after his being sworn in.