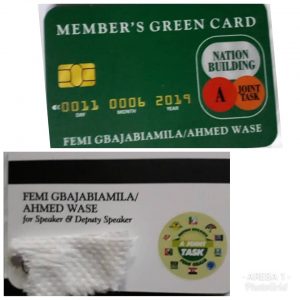 nassnewsng.com
In what is an unprecedented demonstration of desperation by the anointed duo of Femi and Wase, the attempt to compromise the Speakership election as earlier reported today, but as usual was denied by the Femi / Wase campaign organisation.

They are to snap the card with their ballots papers after voting and this becomes the evidence to collect “payment” for their votes.

This is an unprecedented brazen attempt to corrupt the election into the post of Speaker in the house of representatives since the 4th assembly.

When we alluded to character as the highest attribute a leadership must have, they argued that years in the parliament was enough a credential to be Speaker.

Now Honourable Members-elect can see the kind of Speaker and Deputy Speaker they are being forced to vote for.

We had suggested that Mr President and other leaders of the party should thread with caution and be circumspect about who they put their integrity behind, certainly not anyone whose reputation is stained. Now we have been proved right beyond doubts.

We use this medium to put all Honourable Members-elect and Nigerians on notice that this card MUST NOT BE BROUGHT NEAR THE POLLING STATION for the purpose of compromising the integrity of the election to choose the next Speaker of the Federal Republic of Nigeria.