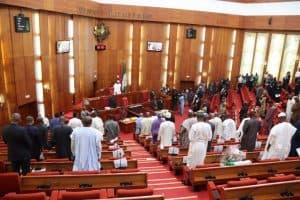 As the Ninth Assembly inauguration commenced, the clerk of national assembly has denied seeing any court order on process of electing Senate President, retains 2015 Standing Rule for Senate, which is open secret ballot senators-elect argues on the process to adopt in voting.

While some pushed for secret ballot , others wanted open ballot.

“I did not receive any court order directing the use of 2011 Standing Order for the election of presiding officers of the Senate”, says N/Assembly Clerk, Mohammed Sani Omolori.

Breaking: Senators Lawal becomes the Senate President of the 9thSenate