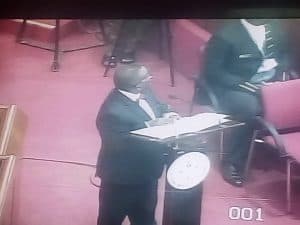 -The Teaching Hospitals are supposed to take care of referred or complicated cases not headache or malaria. – Prof. Isaac Adewole

– The parliament appropriated enough funds for health care, why has it not yielded the required results. -Senate President

The Nigeria Minister of Health, Professor Isaac Adewole has appeared before the Senate today.

The Minister was sent an invitation based on the resolution of the red chamber on the 8th of May, 2019 on the state of facility in General Hospitals across the country.

Prof. Isaac Adewole, while addressing the Distinguished Senators said “Federal Government has 20 Federal Medical Centers and 22 University Teaching Hospitals while most states have their own Teaching Hospitals. In the declaration of 1978 AMAD  Almata, it was mandatory that countries should invest in primary health care but President Obasanjo invested in the tertiary system, Nigeria have no confident in Primary Health Centers except for Teaching Hospitals”.

“14 States that fails to access funds from the basic health funds and has not shown interest in the primary health care system are Kebbi, Jigawa, Akwa Ibom, Cross River, Gombe, Rivers, Ondo, Taraba, Ogun, Nasarawa, Sokoto, Benue, Zamfara, Borno. The 14 States has literally abandon health care, leaving Federal Government alone to carter for them, this is the main problem we have now and we have limitations with resources.

Some teaching hospitals are doing fine

“Federal Medical Center Ebute Metta deliberately mentioned due to renovations going powered by internally generated revenue, Federal Medical Center Yola separated conjoined twins and Federal Medical Center Gwagwalada, we can partner with them to get the Teaching Hospitals as a referral centers only. Improving the management capacity with farm of consultants from tertiary institutions who will go round on how to make sure the hospitals are working fine. Issue of power, water and infrastructure is our major problem and we are bent on solving it by the grace of God.

The Senate President in response to Prof. Isaac Adewole, said the parliament appropriated enough funds for health care, why has it not yielded the required results. On states that fail to access funds from the basic health funds, Senator Ibn Na Allah said he is concern that his state is part of the list. He said the main aim of the parliament is to make sure that the masses gets basic health care, so the parliament could make law to punish any state that refuse to access the fund and be penalized. Leader of the Senate, Senator Lawan recommended that the health minister should approach the state legislators and parley with them. Senator Shehu sani, said the situation in the public hospitals is far worse than the way the health minister described it. As far as the primary health centers are concerned, they are literally underfunded. He suggested if there is any way to engage spirited individuals, ngos, religions establishments who are interested in managing the health care centers and Federal Medical Centers exempted from paying for water and electricity etc. Senator Sam Egwu lamented on medical graduates who now find it difficult to find space for houseman ship, some collect bribe to absolve them on houseman ship if any. Students spent so many years to train as medical doctor and roaming about the street having nothing to do. Senator Lar Solomon said upgrading of general hospitals to federal medical centers should be adopted.

On conversion of state hospital to federal, he said, “By design, a state should have a teaching hospital and general hospital in each local government areas therefore the ministry of Health can’t interfere in the day to day running of the state of hospitals in the states, the boards are there. Abandoned structures are due to uncontrolled level of building health institutions. Let’s stop building structures and make functional use of the structures we have on ground, engaging the private sector. Teaching hospital doesn’t have problem of trained personnel but state hospitals are the ones that is facing such challenge. The States must have a state primary health care board to manage the state health care fund, Counterpart fund and forum of commissioners of health of a state while Governors forum stands as a source.

The minister also said they are aware of that medical graduates now find it difficult to find space for houseman ship, and they are working hard to curb it. Finally, he requested for the senate to always invite them to the budget defense of the state hospital management board, so as to engage them on fruitful spending.