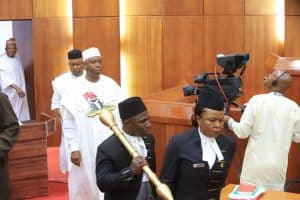 Senator Kabiru Marafa today attained the role of a fashion police during plenary in the red chamber. Marafa, stood up under order 56 which says Senators shall attend the Senate proceedings properly dressed. The controversial senator sited samples examining Senator Shehu Sanni unusual outlook today, he said “Shehu Sani is always dressed on suits but look different today dressed on caftan and cap, he therefore recommended that Senator shehu be returned back to his formal way of dressing because he is fast loosing identity. In like manner, he summons Senator Solomon Lar to explain in plenary to the senate which part of the country he is representing with his own uncommon outfit too. The plenary became rowdy with laughter as the Senate President over rule the order with another focus of the parliament.