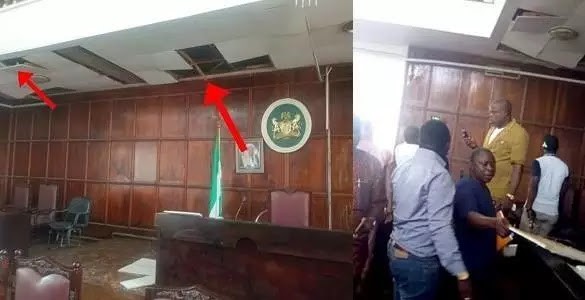 The snake dropped from the roof of the chamber, leaving lawmakers scampering for safety, according to a report by Channels TV.

Legislative activities were then suspended until the complex is renovated.

Speaking with newsmen, the chairman House committee on information, Gbenga Omole confirmed that the house had adjourned indefinitely following the deplorable condition of the hallowed chamber. Omole said that the house was about to seat on Wednesday when a snake dropped from the termite infested ceiling at the center of the chamber.

“Again, we were at the plenary when the ceiling caved in beside the speaker. Omole said “When we were about to enter into plenary, a big snake just ran out of the chamber which disrupted our sitting and we had to hurriedly leave the chamber

“We are about to seat again today when a ceiling caved in directly where Mr. Speaker was sitting, the whole house was agitated and when we look around we saw the damage the termite had done to most of the woodwork in the ceiling.

“At that point, we had to call ourselves and adjourned the sitting. That chamber is no longer safe for legislative business and because of that, we decided to adjourn indefinitely. The house will be going on an indefinite recess.

“We need to intimate the state governor Rotimi Akeredolu about this development and we have decided to meet him on this.

“The Governor is aware of the infrastructural decay here because of the things here are outdated and not too good for legislative business. “As at now, the House has not been given the autonomy we are agitating for, because if it has happened, we don’t need to consult the governor. You know how things are being run presently, every arm of government need to look up to the executive to get things done.

“But pending the approval of the legislative autonomy, we have to look towards the executive where the governor is in charge and we will have to appeal to him to come to our aid because we have a lot of business to do and there is a lot of bills to be treated.

“When I said we are going on recess, we will continue to come to our offices but sitting down in that chamber is what is not going to happen.

“We have written to Mr Governor for him to know what is happening here Omole, however, said

“We eventually killed the snake but there are a lot of reptiles hibernating in the roof of the chamber, and whenever it rains, the whole chamber is flooded.