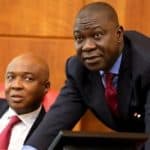 Welcome to a new Legislative Day in the Senate of the Federal Republic of Nigeria!

Senate President, Dr. Abubakar Bukola Saraki led the Principal Officers into the chambers; took the official prayers; and began the day’s proceedings at 10:47am.

Senator Philip Aduda cited Order 10 and moved that since a majority of Senators are on oversight duty, plenary be adjourned. DSP, Ike Ekweremadu rose to second.

“This is in line with order 10.3; if we do not have quorum, we need to adjourn. That being said, all senators currently on oversight function should try to complete all duties before the end of the week.”- Senate President, Dr. Abubakar Bukola Saraki.

Senate Leader moved that all other items on the order paper be stood down to another legislative day. Minority Leader seconded.