Saraki gives CG of Customs freedom to wear anything 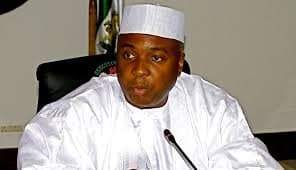 Senate President, Bukola Saraki has given the Comptroller General of the Nigerian Customs, retired Colonel Hameed Ali the free hand to wear whatever pleases him so far he ends the problem of smuggling in the country.

He said: “Once you end smuggling, even if you want to wear jeans and T-shirt, I will personally move the motion to support you.”

The disclosure by the Senate President comes after the Nigerian senate had earlier turned the Customs boss out twice for not wearing his uniform.

Recall that Hameed Ali who has never been seen in his uniform since he assumed office as the Customs boss had stated in an interview months ago that he was appointed into office to tackle Customs problems and not to wear uniform.

The Senate President while speaking in the presence of Ali stated that the Customs boss is allowed to wear whatever he deems fit as long as he ends the problem smuggling.