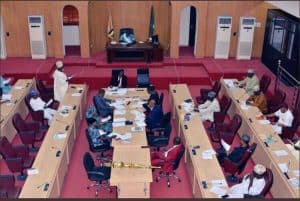 In response to the in kidnap that occurred along the Ibandan – ife express way. The honorable speaker of Osun State Rt Hon Najeem Salam has tasked the Osun State commissioner of police (Mrs) Abiodun Ige to improve security in Osun state and deploy officers of the police to strategic areas.

The speaker in his message said the state which is known to be peaceful and crime free will need effective policing to retain the standard which is known for , He tasked the police to open security post along the express way and strategic places within the state.

The speaker in his message advocated for community policing and security of the community as the responsibility of traditional rulers and people of the community. He pleaded to be people to remain vigilant and report cases of strange gatherings or people in the community

As one of the sole responsibility of the legislatures , the speaker promised that the house will advice the executive on measures and policy that will improve the security of the state and also support the men of the police.

The commissioner in her response applauded the people of the state and said the state remain one of the best in term peace and security. She promised to work hard to provide adequate security for the people and properties

Breaking: IGP in close door meeting with Senators in the red Chambers at national assembly.nassnewsng.com

TO THE NIGERIAN WORKERS ON WORKERS’ DAY,LET US KEEP HOPE ALIVE AND RE-COMMIT OURSEVES TO THE IDEALS OF SERVICE