NGF: Fayemi, a round peg in a round hole- Rep-elect, Bamisile nassnewsng.com

NGF: Fayemi, a round peg in a round hole- Rep-elect, Bamisile 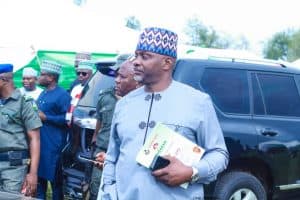 A member of the House of Representatives-elect in Ekiti South federal constituency II, Hon. Femi Bamisile has described “as a round peg in a round hole” the emergence of Ekiti State governor Dr. Kayode Fayemi as the new Chairman of the Nigerian Governors Forum.

Governor Fayemi is not only competent to lead the forum especially at this crucial period of our national life but his emergence will also serve as a catalyst for national unity and progress.

Hon. Bamisile gave the remark in a statement made available to newsmen in Ado Ekiti on thursday.

The former Speaker, Ekiti State House of Assembly salutes the ruggedness and majurity displayed by the governor at convincing his Colleagues across political devide at attaining the new position as a true Democrat.

The federal lawmaker-elect noted that, the election of governor Fayemi will no doubt further bringing in more development especially federal presence to Ekiti State, South west geo- political zone and all States of the federation due to his closeness to the presidency.

As a true Democrat, we are confident that, Governor Fayemi will leave no stone unturned at ensuring the constitutional rights and benefits of all States of the federation are protected as enshrined in the Nigerian Constitution.

The Politician commended other Nigerian Governors irrespective of their political inclination and background on their solid support for Governor Fayemi especially at electing him unanimously during their meeting in Abuja and called on them to continue in this trend for him to succeed.

While congratulating the new Chairman of Nigerian Governors forum, Hon. Bamisile charged him to continue and remain more untiring, herculean and spirited in his efforts at promoting the core values and integrity of the People of Ekiti State at all times.

According to him, the latest development is another recognition of the fact that, Ekiti People are loyal, sincere, hardwork, transparent and above all highly cerebral at handling issues of importance any time, any day in their chosen careers.

He however called on the people to always pray for the success of Dr. Kayode Fayemi as a governor in Ekiti State and especially on his new position in the Country.