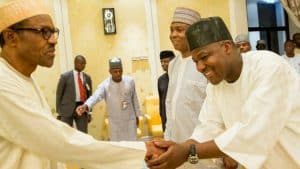 The route to the Speakership of the 9th House of Representatives seems to be getting smoother for Mr. Femi Gbajabiamila (APC, Surulere, Lagos State) as the camp of  the outgoing Speaker Yakubu Dogara is demanding the slot a deputy Speaker for a Christian candidate.
Related Posts

Four of his co-contestants for the position have pulled out of  the race for him ,The Nation gathered yesterday.

But two others are still in the contest with him.

The battle for the Senate Presidency remains a three-way affair for Dr. Ahmad Lawan, Chairman of the Senate Committee on Appropriations, Alhaji  Danjuma Goje and a former Senate Leader, Alhaji  Ali Ndume.

Sources said Idris Ahmed Wase (Plateau), Abdulrazak Namdas (Adamawa), Aliyu Betara Mukhtar  (Borno), and Yusuf Yakubu Buba (Borno) have stood down their ambition for Gbajabiamila who is favoured by the APC hierarchy for the job.

Umar Mohammed Bago (Niger) and John Dyegh (Benue) are yet to withdraw from the race.

Although Wase has been adopted for the office of Deputy Speaker, he faces a fresh hurdle from the camp of outgoing Speaker Yakubu Dogara which is demanding the slot for a Christian candidate.

But some members-elect are insisting that religion should not be a factor for Wase because, according to them, there had been a Christian-Christian mandate in the House in the past.

They said merit and capacity, rather than religion, should be the overriding factor.

Investigation by our correspondent revealed that the withdrawal of the four ranking Reps for Gbajabiamila is a fallout of  ongoing negotiation between  the  Gbajabiamila camp and critical stakeholders in the chambers.

A source called it a major breakthrough in the quest to install Gbajabiamila as the next Speaker.

The four have also agreed to join forces to work for Gbajabiamila whose party (APC) has over 226 of the 360 members-elect.

Gbajabiamila, who also has associates in PDP, needs about 181 votes (if there is a full house of elected members) to emerge as Speaker.

A well-placed  source  said: “So far, the campaign for the office of the Speaker is taking  a good shape for Gbajabiamila with the withdrawal of these four heavyweights from the race.

“We are however not taking things for granted. There is a little relief in the APC camp because the PDP appears not keen any more for the office of Speaker because of the intense lobbying from Gbajabiamila’s friends, associates and strategists.

“About three weeks to the election of principal officers, most PDP lawmakers-elect are still awaiting directive on who to vote for. Instead of losing out, some of them have decided to align with Gbajabiamila to be in good stead for the House politics.

“Notwithstanding, the campaign team of Gbajabiamila has sustained its outreach by paying more attention to his sterling legislative qualities than sentiments around his recommendation for the office by the party.

“We have spent quality time to clarify the godfather allegation being circulated to prove that Gbajabiamila is a cosmopolitan candidate.