Lawmakers locked out of Government House in Minna 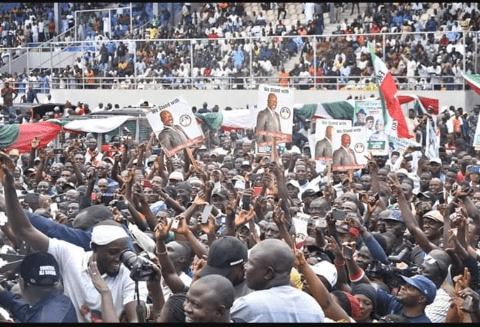 Lawmakers locked out of Government House in Minna

The battle line has been drawn in Niger State as members of the state House of Assembly have vowed not to attend any event organised by Governor Abubakar Sani Bello in the Government House.
They lawmakers were barred from entering the Government House during the swearing-in ceremony of new Commissioners on Wednesday.
The legislators regretted the treatment meted them after playing vital roles in the screening of the Cabinet members.
It should be recalled that the legislators, who arrived at the gate of the Government House in a Coastal bus, were told by security operatives that they could not be allowed in to witness the ceremony because they arrived late.
The aggrieved members, while addressing journalists, vowed equivocally that all through their stay in Assembly, they will not enter into the Government House again.
The Member representing Wushishi Constituency, Hon. Mohammed Bashir Lokogoma, who expressed his grievances to journalists, said: “It is an embarrassment for the state, and to us, the members, for them to have denied us entry into the Government House when other people who had no business of being there were allowed in.”
Lokogoma, who is the oldest serving member of the House of Assembly, declared that Bello and his protocols belittled the office of the legislators.
He said: “It is very unfortunate.
“As a member representing my constituency, I think I am a major stakeholder regarding this issue.
“We were the ones who confirmed these commissioners.
“Why should we be denied entrance?
“I do not think that going to the Government House as a legislator is out of place.
“No matter what, they should have found a way for us to come in and even get a place for us to sit.
“It is very unfortunate.
“It made me cry.
“I have been in the system for a long time.
“This is my fourth term in the Niger State Assembly and this situation made me cry because I have never had an embarrassment like this before.
“I and other lawmakers have vowed never to go into Government House again, no matter the function that is being held there.
“We will never ever enter into Government House again.
“Our work is in the House of Assembly and not in Government House.”
Speaking also, the Member representing Bosso Constituency, Hon. Madaki Malik Bosso, said there was no justification for what the governor did while vowing to avoid going to the Government House.
Bosso told newsmen: “They said we were late.
“Are we students?
“It is only students that you tell that they are late.
“As a member of the state Assembly, you tell me I am late?
“Do they have timing in Government House.
“Do they have time for who should come when and how?
“When we got there, the event was yet to begin.
“So how are we late?
“It is very embarrassing and the only way I would avoid this embarrassment would be to advice myself to avoid going to the Government House.
“And the same goes with other legislators.”
The Member representing Edati Constituency, Hon. Saliu Tamar, who was very angry, disclosed: “It’s God that brought me to the Assembly through my Constituency and no other person.
“It is unfortunate that we went through this kind of situation.
“In Niger State, we are in mess entirely.
“I do not want to speak about the issues.
“I am still angry.”
When feelers got to Governor Bello, it was gathered that he sent his Deputy, Ahmed Ketso, to appeal to the legislators.
At the House of Assembly complex, at about 2pm, the Press Crew and some protocol of the Deputy Governor were on ground in preparation for his coming.
They however left after some minutes, saying they had information Ketso was busy somewhere else and could not make it again.
Findings have it that the legislators had refused to see the Deputy Governor, saying they do not need him to apologize on behalf of the Governor