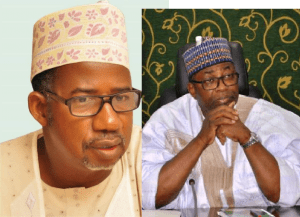 All eyes are on the electoral umpire to take the final decision on what will happen in the governorship election in the Bauchi state. Whether a winner will emerge after it might have gone ahead with the collation or whether there will be a supplementary election to produce a winner. Meanwhile, it has to finalise the legal battle against its decision to continue the collation of the results. The re-run holds as court fixed Monday for hearing.

Our correspondent in nassnews had  a chat with the PDP governorship candidate, Senator Bala Mohammed. He said “Federal Government can use security and inec against the people’s wish but if election is conducted again, i will win as the people of Bauchi are strictly behind me”.

They People’s Democratic party PDP have recorded a big victory as the Independent National Electoral Commission INEC umpire has announced the winner in Bauchi State election that was held in the state which have been subject of serious controversy.

Recall that the result of the election in the place was not announced following the declaration of the election as inconclusive by the Independent National Electoral Commission (INEC) for some reasons. The Peoples Democratic Party (PDP) has won the Tafawa Balewa constituency in the Bauchi State House of Assembly which was one of the major area of controversy in the state election.

Also, the result of the governorship election in the state was not declared because of the initial decision of INEC which has kept most people in suspense. Meanwhile, the result announced by INEC on the state assembly election in Tafawa Balewa constituency showed that the PDP won with 29,933 votes against the APC that scored 25,210 votes. The PDP emerged winner in the election after the resumption of the collation by the Independent National Electoral Commission (INEC).

The results for the governorship election was however halted because of Court Order given by an Abuja High Court following a suit filed by Governor Mohammed Abubakar and the All Progressive Congress, APC. It would be recalled that the Tafawa Balewa local government results were rejected by the state INEC Returning Officer, Professor Mohammed Kyari after an alleged reported cases of violence and intimidation at the local government collation Center.