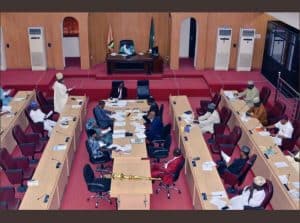 It was reported on our social media platform on Monday that the Osun State House of Assembly summoned the leadership of Ibandan Electricity Distribution Company (IBDEC) to the state House of Assembly due the disconnection of Ijesha community from the National Grid and the reaction that follows after that.

The meeting which was suppose to commence the 10am was delayed till about 2 am due to the power outrage. In attendance is the Hon Speaker , Honorable Members , Senior Staffs of IBEDC Community leaders including newly elected Hon member representing Boripe state constituency Hon Ayeni and leaders of the youth leaders

The meeting commenced with the Hon Speaker , Rt (Hon) Najeem salaam condemning the attack on IBDEC with the claim that the action is against the virtuous standard of the state . He further allowed the leaders of community to speak and give insight details of the situation. Speakers among the leaders include pastor Adedeji who complained about the staffs of IBDEC and apologized on behalf of the community. Other speaker includes the youth leader Adeleye Michael who speak extensively on the matter , He explained the background , the action of the youths , the reaction and counter reactions which includes the attack on the IBDEC office ,eventual arrest and gun shots that led to the death of one the youths

Members of the house of Assembly wants the electricity restored within the communities 24 hours and blamed the crises on bad customer relations and monopolistic approach by IBDEC. All effort to restore electricity proved abortive as staffs of IBEDC sighted reasons ranging from Technical and bureaucracy. Engineer Tunde Abiodun said the some of equipment and tools are vandalized by youths while the regional manager Mr Akin Ogunleye explained that the company will have to set up committee to check the office to see the level of destruction and evaluate it .
The House suggested that and make the following Recommendations
* IBEDC Should try and restore power to ilesha and its environment
* Released Detained Youths
* Visit and console the family of the deceased
* Have regular meeting leaders and youths of the community
IBDEC assures the House that power will be restored to the sub-hub and other community affected will have to evaluate cost and fixed the vandalized equipment before restoring power to ilesha. The house have set up ad-hoc committee to join the community leaders and IBDEC to inspect and evaluate tomorrow.