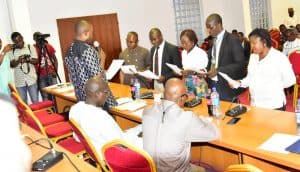 May I sincerely welcome you all to this epoch making event. It gladdens my heart that, today, being Wednesday, 15th day of May, 2019, the 8th National Assembly has recorded yet another great feat by inaugurating a Forum for online Journalists who are accredited to cover the activities of the Parliament.

At its inception, the leadership of the 8th Assembly in its wisdom, created an office for, and appointed Special Assistants on New Media to the Senate President and Honourable Speaker, in addition to existing offices such as Special Adviser on Media and Chief Press Secretary; for effective dissemination of information to the global world through the internet as well as liaising between the online media and their principals.

Undoubtedly, this creation has greatly been of immense benefit to the 8th Assembly and was a great contributor to the success of this Parliament, in the face of increasingly digital and new media evolvement. This trailblazing precedence, will also inform the leadership of the 9th Assembly on constitution of digital media handlers that would help set narratives for the Parliament in the next four years.

The Conference of Speakers of Commonwealth of Nations converged on Abuja in August, 2017, and issued a strong worded communiqué, that all member states should develop mechanism for e-parliament. This simply instructed that member states should as a matter of international standard, institutionalize the culture of reporting the activities of the Parliament through the internet or NEW MEDIA.

For a takeoff, the Forum has a membership strength of 31 Journalists drawn from reputable online media organizations with standard editorial organogram and membership of the Nigeria Union of Journalists (NUJ). This is in addition to pending applications from members who are currently undergoing NUJ registration.

We are not unaware of teething problems associated with the birth of new babies, but with the support of the leadership and management of the National Assembly, this baby will not die but will grow to compete favourably with its peers amongst the comity of Nations.

We therefore solicit the kind support of the management in allocating an office space where members could have access to strong internet facilities to file in their reports after plenaries or after briefing at the general press centres. It is also very important to us that, the clerks of various committees at both chambers be appropriately informed about our existence, so as to receive constant invitations to committee assignments, for the purpose of getting access to information, which is the fundamental reason why everyone of us is in National Assembly, in the first place. Other takeoff assistance from the management shall be greatly appreciated.

Having said this, ladies and gentlemen, let me sincerely appreciate the President of the Senate, Dr. Abubakar Bukola Saraki, the Honourable Speaker, Rt. Hon. Yakubu Dogara, the Clerk to the National Assembly, Chief Mohammed Ataba Omolori, the Directorate of Information and Publication, the Chairmen and Clerks of Committee of Media of both chambers, the National Assembly Press Corps and lawmakers and staff of the National Assembly; for their constant support for the online media and for making today a reality.

We shall strive to justify the confidence reposed on this Forum. We shall crave for professionalism, objectivity and integrity, while upholding the code of conduct and ethics of journalism, as we discharge our duties with utmost regard to the institution of the National Assembly and the constitution of the Federal Republic of Nigeria.

Kano House Of Assembly Commended For Speedy Bill Passage To Create Additional Emirates. By Jabiru A Hassan, Kano. Kano state house of assembly has been commended for passing a bill the pave way for kano state governor to create 4 more emirates in the state for the promotion of traditional ruling institution with optimum results. Nigerian assembly News correspondent in kano who had a series of interviews with some kano residents, reported that most of the people described the creation of more emirates in kano as a good development that will resulted in the development of the traditional institution as seen in many States. Malam Mustapha Umar Tallo Gwarzo, leader of kano north youth for good governance in his remark said that the decision by the kano state government to add more emirates is a welcoming idea, and according to him, creating more emirates would bring progress to traditional rulers because traditional institutions needs to be expanded for better leadership. He lamented that ” everybody knows that kano people has been yawning for more emirates so as to be more closer to their traditional rulers, that is why we are happy with what governor Ganduje did at this precious time and I am calling on all the people of the newly created emirate to support this new development’. He concluded. Similarly, a businessman and current affairs commentator, Alhaji Usman Dangwari disclosed that the creation of four more emirate councils is a testimony that kano state has taken a new look because expanding the traditional institution is a key to successful leadership as seen in many states long time ago. He called on the good people of kano state to support the creation of the new emirates to eneble the state move forward, where he congratulated the new emirs for enthroning the helms of the affairs of their emirate councils.