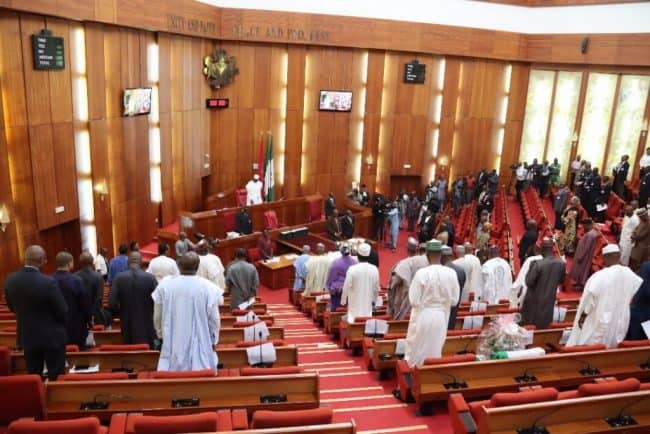 0 175
Share
by Ihegazie Hope Chidinma
Senator representing Akwa-ibom North West, Ekpenyong C. Stephen has pleaded with the Federal Government to show concern by investigating the delay on the construction of the road leading to Ikot Ekpene-umuahia and Aba-ikot Ekpene highways linking Akwa-ibom and Abia State.
Ekpenyong made this appeal on Thursday 18th July at the National Assembly while presenting a motion which was seconded by Senator representing Abia south, Abaribe Enyinnaya Harcourt and Senator representing Abia central, Orji Theodore Ahamefule.
Ekpenyong explained that the Umuahia-Ikot Ekpene road was first constructed in the early 60’s shortly after Nigeria’s Independence and since then subsequent Government have not done significant developments on the road in terms of expansion and even routine maintenance.
He further disclosed that the two states have tried within their limited resources to keep the road motor-able by carrying-out temporal maintenance work which to a large extent does not stand the test of time.
He also stated that these roads are the major roads connecting the south-west, north central, south-east and the south-south states of Edo and Delta to Akwa-ibom and Cross River states, in the Northern flank.
“the situation of the roads are worst during the raining seasons, especially the Umuahia-ikot Ekpene road. As a matter of facts, the road presently is not passable, most of the broken portions have become rivers and water logs and is now a safe haven for hoodlums as they have taken advantage of these bad sections to operate freely especially at night”.
“the alternative route is so fragile and not capable of carrying heavy duty vehicles which it’s presently subjected to and no sooner or later might get dilapidated”.
Ekpenyong further explained that if construction work is not expedited to salvage the situation, the two states may be completely ousted and people will be denied passable roads to travel back home but will also be taken back to the aged long days while as at today Nigeria is making efforts to move to the next level.
He therefore urge the Federal Government through Federal  Road Maintenance Agency (FERMA) to expedite action on intervention measures to salvage the road from total collapse and investigate the Daley on the road which has been awarded to NIGERCAT construction company since 2008.
Related Posts