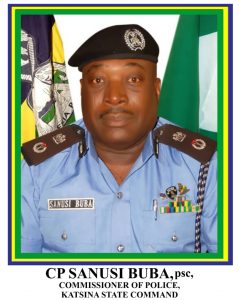 As the clamp down on all forms of crime and criminality thrives in Katsina state; the Command under the leadership of CP Sanusi Buba, psc, has being recording tremendous achievements in that regard. During the period under review the following achievements were made as abridged hereunder:

1. ARREST OF A NOTORIOUS MEMBER OF CATTLE RUSTLING/ ARMED ROBBERY/KIDNAPPING SYNDICATE AND RECOVERY OF ONE AK 47 RIFLE WITH BREECH NO. 1977: On 15/03/2019 at about 16:00hrs, based on a tip off, the Command succeeded in arresting one Umar Usman alias “ORI” ‘m’, aged 45yrs of Garin Dan –Gambo village, Rugu forest, Safana LGA of Katsina state, a member of notorious armed robbery and kidnapping syndicate terrorising Safana and Batsari LGAs of Katsina state. In the course of investigation one AK 47 rifle with breech No. 1977 was recovered in his possession. Suspect is assisting the police with useful information that may lead to the arrest of other members of his syndicate.

2. RECOVERY OF ONE AK 47 RIFLE BREECH NO.89-11825 WITH TWO ROUNDS OF 7.62MM LIVE AMMUNITION: On
26/03/2019 at about 15:00hrs, a fire wood cutter, one Aliyu Sani, ‘m’, aged 25yrs of Sabon Layi village, Faskari was reported to have been attacked by armed bandits in the forest. Police patrol team were immediately dispatched to the scene and engaged the hoodlums in a gun duel. The team succeeded in dislodging them and recovered one AK.47 rifle with breech number 89-11825 and two rounds of 7.62mm live ammunition abandoned by the hoodlums.

3. ARREST OF ARMED ROBBERY SUSPECTS: On 21/03/2019 at about 09:30hrs, based on a tip off, the Command succeeded in arresting the duo of Sanusi Sani, ‘m’, aged 30yrs of Landan-Ketare village, Kankara LGA of Katsina state and one Bello Abdullahi, ‘m’, aged 30yrs of the same address, who on 04/03/2019 at about 21:30hrs, armed with dangerous weapons, blocked Tashar Kawu – Unguwar Zaki feeder road, Kankara and robbed one Abbas Halilu, ‘m’, aged 25yrs of Bada’u village, Kankara of his Techno Handset valued ten thousand naira (N10,000:00K) and unregistered motorcycle Bajaj valued one hundred and eighty thousand naira (180,000:00K) after beating him to a state of coma. In the course of investigation, suspects confessed to have sold the motorcycle at the cost of one hundred thousand (N100,000:00K) in Kano state. Suspects confessed to series of armed robbery incidents, terrorizing Kankara and its environs.

4. ARREST OF A NOTORIOUS THIEF OF MOTORCYCLES AND RECOVERY OF ELEVEN MOTORCYCLES SUSPECTED TO HAVE BEEN STOLEN: On 23/03/2019 at about 09:00hrs, based on a tip off, the Command succeeded in arresting one Hassan Tanimu, ‘m’, aged 19yrs of Marina Quarters, Mani LGA of Katsina state, a notorious motorcycle thief terrorizing Mani, Mashi, Charanchi, Kankia and Kusada LGAs of Katsina state. In the course of investigation eleven assorted motorcycles reasonably suspected to be stolen were recovered in his possession. Furthermore, over ten (10) suspected receivers of the stolen motorcycles have been arrested and are assisting the police in their investigation.