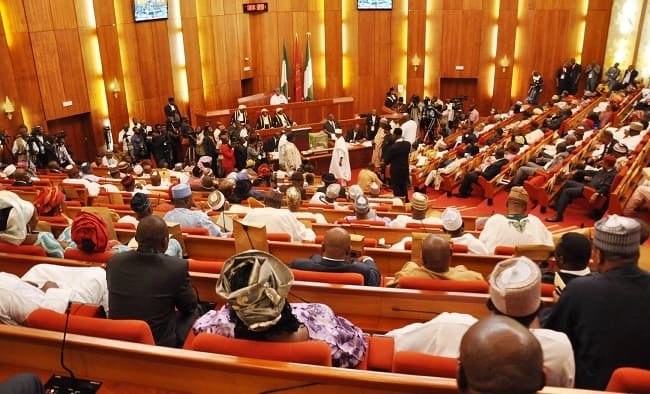 Senators on Wednesday were locked in a heated debate over a bill seeking to establish Armed Forces Service Commission.

Leading the debate, Sponsor of the bill, Senator Enyinnaya Abaribe, said the Commission would ensure that the composition and appointment of the service chiefs of the armed forces reflect federal character in a manner prescribed in section 217 (3) of the 1999 constitution.

Lawmakers, who backed the bill, argued that the bill stands on a very strong constitutional ground and also invited the Senate to exercise its constitutional rights.

Others, who opposed it, said the establishment of the Commission would politicize the armed forces, which, they argued, was dangerous for the peace and unity of the country.

After the debate, the bill was put to a voice vote by Senate President Ahmad Lawan.
“The nays had it” Lawan banged the gavel.

Quickly, Abaribe stood up and cited order 73, which says that any Senator can challenge the ruling of the presiding officer. He therefore called for voting on the bill.

But Lawan interjected and said the ruling was not his personal opinion. He said, “It is not my opinion that the nays had it. I didn’t rule inappropriately.”

But Abaribe insisted that it is his right to call for voting on the bill, saying, “I’m only saying, give me my right and my right is that all our members should get up and vote.”

At this point, Senator James Manager (PDP, Delta) advised the Senate President to allow voting to take place.After about seven minutes in limbo, the Senate went into a closed door session.

When the Senate reconvened, Lawan asked Abaribe to withdraw the bill and he did, saying he would review it and present it at a more appropriate time.