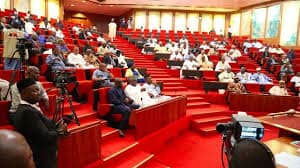 Senate has on Wednesday considered a bill that will make provision to repeal the federal roads maintenance agency.

This was contained in a bill for an Act to repeal the Federal roads maintenance agency Act 2002 (as amended) the federal highway Act 1971 and the Control of Advertisement Act 1986 and to establish the Federal road authority to provide for the ownership, Regulation, Management and Development of the Federal road network and for other matters connected therewith, 2019(SB.89) presented by Senator representing Oyo north, Bassey Gershom Henry.

Speaking on the Bill, Senator Bassey who lead the debate explained that the 36.000km Federal road network is by far the largest and most valuable single public infrastructure asset owned by the Federal Government of Nigeria, adding that there is nowhere in the world that the expanse of road network is managed solely by Government.

Bassey worried that it is so unfortunate that over 80percent of goods and services are transported by road leading to tremendous pressure on the roads since other modes of transportation like rail and shipping are underdeveloped and air transport is too expensive for most Nigerians.

He said that this is the time for Nigeria to have a road authority that is in sync with international best practices on road management and maintenance, with techniques that will measure up with other countries.

Bassey however called on the 9th Senate to clearly work towards revamping the Nigerian road network which has suffered neglect over the years because of poor funding.

Meanwhile still on this Bill, Senator Oduah Stella Adaeze of Anambra North and other Senators while contributing on the debate, expressed worries over the bad condition of the roads, adding that the bad road is one of the major causes of insurgency and other vices in Nigeria.

Senate president, Lawan while considering the prayers of senator Bassey, therefore mandated the committee on Transportation to look into the matter and proffer a better solution with immediate effect.