Reps urge federal government to extend bail through out…. 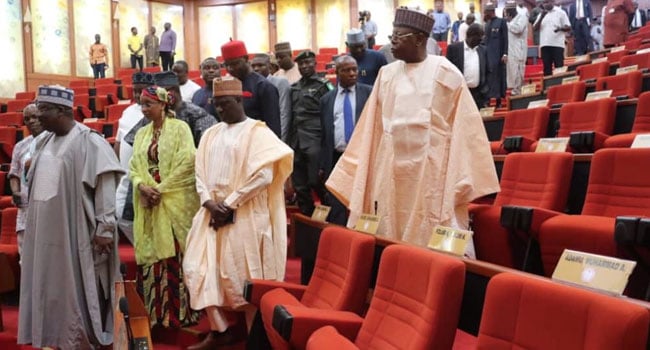 The House of Representatives on Thursday urged Federal Government to extend the bail out through the Bank of Industry, the Bank of Agriculture, the Nigeria Export and Import (NEXIM) Bank to resuscitate the moribund industries across the country.

The resolution was passed sequel to the adoption of a motion sponsored by Hon. James Faleke, chairman, House Committee on Finance, where he expressed grave concern over the spate on unemployment in the country and the need to resuscitate all the vocational training centres through National Directorate of Employment (NDE).

Some of the lawmakers who spoke in favour of the motion are: Hon. Rotimi Agunsoye, Hon. Nnoli Nnaji, Hon. Aminu Suleiman and Hon. Joseph Adejare.

In his lead debate, Hon. Faleke observed that out of about 20 million unemployment graduates in the country, 1.3 million new graduates pass out yearly from over 170 accredited universities for National Youth Service Corps (NYSC), excluding millions of graduates from Polytechnics and National Certificate in Education.

While stressing the need for deliberate steps to address the economic crisis, Hon. Faleke urged the present administration to initiate a process of identifying specific and critical industries in the country that will be part of the bail-out program and devise strategies that will lead to improvement in power supply, especially to serve the industries so as to prevent them from going under due to the high cost of power.

In the same vein, the lawmaker stressed the need for Federal Government to yield to the clarion call for the completion of the moribund Ajaokuta Steel Company, and give

He lamented that majority of graduates turned out by various tertiary institution “lack the technical knowledge and capacity to become self-employed or to create employment opportunities for others.

“As a result of the collapse and closure of many industries that would have employed those graduates, they are now left to roam the streets of major cities in search of unavailable jobs, in the process, are exposed to the risk of kidnapping, prostitution, cultism, armed robbery and other sundry crimes, as well as falling prey to the antics of employment scammers who take advantage of their desperation to exploit them.”

Hon. Faleke further observed that many States of the Federation which are dependent on allocations from the federation account for running the States, recently, got bailout funds to pay salaries of workers, as a result, cannot be looked upon to provide employment for their graduates.

He recalled that Federal Government has introduced peoples friendly programs such as Trader Moni, N-Power and Out Grower scheme to cushion the effects of unemployment but it is like a drop in the ocean in comparison with the number who do not have access to the portals on which those opportunities are advertised.

He however stressed that another program that would bring stronger impact in the immediate future is the school feeding program but the expected correspondence link between those programs and employment opportunities inherent in them, such as engagement of caterers which is expected to lead to increase in food production, establishment of new farm settlements, empowering young graduates to go into farming are limited and the system of farming in the country is obsolete and lacking modern mechanism, thus becoming unattractive to the graduates as an employment option.

“Unless the Federal Government takes drastic steps towards redirecting this trend, the country will continue to experience geometric rise in ritual killings involving young people, brigandage, internet fraud, terrorism and other sundry crimes.

“Before now however, Nigeria Economy was full of activities in the areas of manufacturing, textiles, tyre, food processing industries, vehicle assembly plants to mention a few etc.

“It is on record that the House has raised series of motion on the need to complete Ajaokuta Steel Company which would have been the bedrock of development of the economy. We have also at many times intervened in the power sector. All these actions were to improve the economy and create employment opportunities and generate income from oil.

“Nigerians are forced to leave the country to other lesser African countries (among others) such as Libya, Ghana, South Africa etc. in search of greener pastures-when in those days the reverse was the case.

He maintained that “these bail out will help reduce the country’s dependence on imports, increase income and gross domestic products of the country, boost the foreign reserves, thus leading to economic buoyancy and reducing dependence on oil as the major income earner for the country.

Hon colleagues and fellow Nigerians we must think outside the box to bring our country back on the foot of development without crude oil.

“As the most populous country in Africa if we are technologically driven and harness the brains our citizens are using in the areas of internet proficiency within and outside this country, human capacity and technology should be our major source of income just as it is for other developed countries.

While ruling, Speaker of the House of Representatives, Hon. Femi Gbajabiamila referred the motion to the House Committee on Commerce for further legislative action