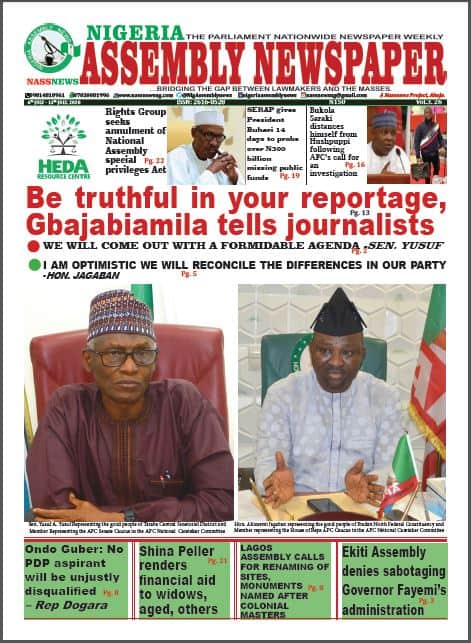 “Gone are those days when you pick up the paper and what you read you know is gospel truth”.

Those were the words of the Speaker of House of Representatives, Hon. Femi Gbajabiamila, while engaging with Journalists that cover the activities of the House, on July 2, 2020.

With the coming of the internet and its democratization of the media practice whereby a new brand of journalism has emerged, the idea of fake news crept in too. With the internet at the finger tip of people everywhere in the world, citizen journalism was born. Everyone with a phone can practically report events (news).

Today, every news medium now has the ‘eye witness’ segment where citizens who may not be professionally trained journalists generate contents for media houses by recording and sending such events to the media outlet for publishing.
Indeed, there is no sphere of human endeavour that has been affected by the advent of the internet like the media sector.

However, even with the plethora of ‘news’ activities in the internet space, online news media remain distinct from ‘citizen journalists’ and bloggers. The difference here lies in the fact that online news platforms or online newspapers actually practice journalism according to the established rules and ethics of journalism, which basically stands on the mantra that says, ‘when in doubt, leave out’.

As a practising online journalist and a member of the Nigerian Union of Journalists (NUJ), it saddens me that we (online journalists) are rather becoming our own biggest enemies. It is now a common thing for people (both in public office and private individuals), to constantly use such comments like ‘I read it in the social media’; ‘it was all over social media’; ‘you cannot rely on social media account’ and many such comments, which primarily aim to belittle the source or make it look like since it was not delivered on print or television the ‘credibility’ of the news is in doubt!

It becomes even more painful when practitioners of online newspapers play into the hand of those whose sole aim is to discredit the new media by peddling lies and conjectures in the name of ‘exclusive’ news items and reports.

For example, Sahara Reporters is one of the very first online newspapers in Nigeria, though published from the United States of America, nearly 100% of its news contents come from Nigeria or concerns Nigeria.

However, of late Sahara Reporters has consistently put those of us in the online newspaper business at risk of serious public distrust.

Just last week, July 7, 2020, the newspaper reported that 50 members of the House of Representatives had tested positive to the dreaded corona virus, prompting the House to adjourn for a week.

This particular report which has since been found to be false, triggered series of unpleasant consequences for everyone working in the complex as even their families became alarmed and jittery. The House, through its Spokesman, Hon. Benjamin Kalu, in a press statement refuted the Sahara Reporters’ claim, but even then, the damage had been done.

There have been series of outcries by people and organisations that had been ‘victimized’ by this news medium. One of the outstanding cases was documented on pages 19 and 20 of Dr. Ngozi Okonjo-Iweala’s recent book: Fighting Corruption is Dangerous.

In her account, Okonjo-Iweala, two time Nigeria’s Finance Minister wrote, “Friends and family alerted me to a spate of articles that had began to appear in a Nigerian online news outlet, Sahara Reporters, that were attacking me and the notion of my return to government as Finance Minister.

“One night I received a call on a private phone line that I had reserved for use only by my family. When I picked up the phone expecting a family member, a voice said ‘this is Omoyele Sowore of Sahara Reporters’ and that he had some questions for me to answer. I was outraged. Shortly after, a tape of our conversation appeared on the internet.

“Not only had this man violated all rules of decent behavior, but he had gone beyond to do something as unethical as taping our conversation without my knowledge or permission. I did think this was a news medium worthy of any attention”.

As a Journalist practising in an online news outlet, I am deeply worried that the tactics and practices of some of our colleagues in the online media space may eventually discredit us all to a point that we may become a butt of joke, even when online journalism remains the future of journalism in Nigeria, just like in other places in the world.

The era of fake news, distortion of facts and subjective presentation of information by some media outlets is becoming worrisome. It is more devastating when, as an established media organization, it descends so low as to dwell in what many observers and practitioners alike call ‘junk journalism’.

We have credible online newspapers like Premium Times, The Cable, Legit.ng, Pulse, Daily Post, e-parliament, Orderpaper, Starnews, Daily Nigerian and many more that have distinguished themselves as very credible news sources, yet, the action of one single medium continues tar every one with a brush of ignominy.

It has therefore, become imperative to call on stakeholders in the online Media sector, media regulatory agencies, media rights based organizations, including the Nigerian Union of Journalists, Nigeria Guild of Editors, Nigerian Press Council, Media Rights Concerns, International Press Council, amongst other stakeholders, to speak out against these unethical practices to nip in the bud this ominous signs.

(Moses Idika, an Editor with e-parliament, writes from Abuja, Nigeria).