The speaker of Osun State House of Assembly, Rt Hon Timothy Owoeye marked his first birthday since the 7th administration came on board and decided to celebrate with motherless children and sick patients.

The speaker who said his position as the 3rd citizen in the state is an un-common grace and it came at the period when everyone believes his political career is over but God remained merciful to him. The speaker believed the best way he could show his appreciation to God is by identifying with the needy and less privileged the society

Mr Timothy Owoeye and his political associates visited the FOWAN orphanage home at Ogo-Oluwa Osogbo and was welcomed by the state Amirah Alh. Kudirat Oladunmoye who thanked the speaker for the kind gesture and ability to remember the motherless . The speaker also visited the Our Lady of Fatima Orphanage at Jaleyemi area of Osogbo where Rev. Sis Mary Akinlotan showed him around to meet with the kids and he also took his time to visit kids at Femek Orphanage at Oke-Baale area in Osogbo. 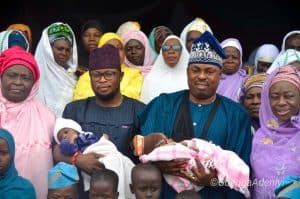 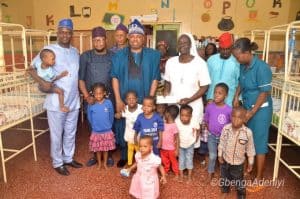 The speaker extended the kind gesture by visiting the Wesley Guild Hospital in ilesha, a branch of Obafemi Awolowo University Teaching Hospital Complex, where Mr Owoeye donated gift items to the hospital just as he settled the hospital bills of some of the patients

The speaker during an interview with journalists says legislature under his watch will ensure that the welfare of the vulnerables and the less privileged will take centre stage of their decisions.