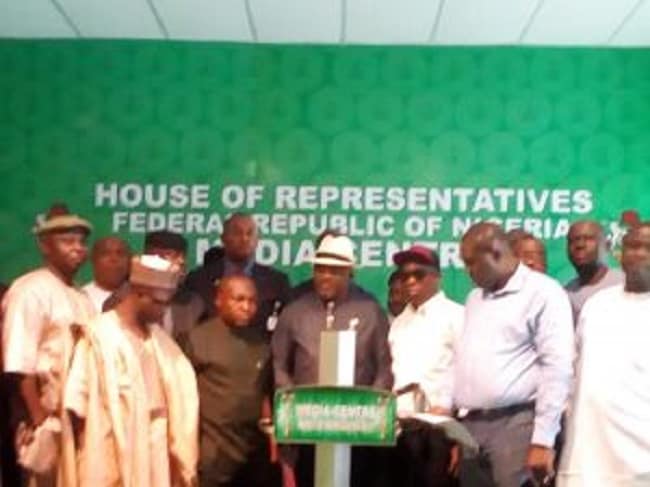 The minority members caucus held a press briefing at the national assembly complex today. The caucus addressed the press on the issue of minority leadership of the House of Representatives.

He said, the members of the minority parties adhered to the provision in the selection of 1. Hon. Ndudi Elumelu 2. Hon. Tobi Okechukwu 3. Hon. Gideon Gwani 4. Hon. Adesegun Adekoya as minority leader, deputy minority leader, minority whip and deputy minority whip respectively. He said the speaker was communicated the resolution by majority members of the minority caucus on the 2nd, July and was communicated on the floor of the house on the 3rd, July 2019.

The PDP caucus is calling on the nwc of the PDP to rescind it’s decision of suspending the minority leader, Hon. Ndidi Elumelu and six others.

The minority parties passes a vote of confidence on the newly constituted minority leadership.

The spokeman of the minority caucus said that the members decision to constitute the minority leadership of the 9th House of Representatives is in consonance with House standing order as mentioned above, which is a derivative of section 60 of the 1999 Constitution as amended.