Only 69 senators in return bid

Only 69 senators in return bid
nassnewsng.com 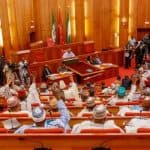 it
Only 69 out of the 109 senators currently serving in the 8th Senate will contest the February 16 National Assembly election, to return to the upper chamber of the nation’s legislature

The various political parties across the country conducted their primary elections between September and October 2018, ahead of the general elections, which according to the timetable by the Independent National Electoral Commission (INEC), will hold on February 16 and March 2. Following the INEC schedule, the presidential and National Assembly elections will hold on February 16, while the governorship and state Assembly elections will take place on March 2.

For the senatorial election, only 69 out of about 80 serving senators, who contested for return tickets in their respective parties were successful at the primaries and will test their popularity at the poll. Similarly, eight out of 12 others, who contested for gubernatorial tickets in their respective states made it, while 33 lost out in the primary elections and will consequently not participate at all in the forthcoming general elections. The 68 senators striving to return to the apex legislative chamber in the National Assembly elections will be contesting under different political party platforms.

Serving senators contesting on the platforms of other parties are Victor Umeh (APGA, Anambra Central), Monsurat Sunmonu (ADC, Oyo Central), Shehu Sani (PRP, Kaduna Central) and Barnabas Gemade (SDP, Benue North East). Among the senators who will be standing for governorship seats in their respective states across party lines are John Owan Enoh (APC, Cross River), Buruji Kashamu (PDP, Ogun), Usman Nafada (PDP, Gombe), Sonni Ogbuoji (APC, Ebonyi), Hope Uzodinma (APC, Imo) and Jeremiah Useni (PDP, Plateau State). Judging from the existing trend in the Senate, it is obvious that out of the 68 senators going for re-election on February 16, at least not less than 28 of them may not actually return by the time the chamber will be inaugurated in June. This prediction is predicated on high turnover of lawmakers that has characterized the National Assembly since the nation’s return to democratic rule in 1999.

*Nigerian Newspapers: 10 things you need to know this Thursday morning* on January 10, 2019 Complied by *nassnews.com*