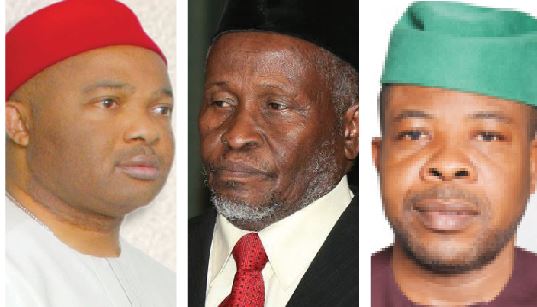 I have now had the opportunity to read the Supreme Court written judgement on this case. There is no point doing a long thread on it. I will explain my thoughts in lay man’s language for all to understand. Summary of my views are as follows:

1. The S/C rejected the motion of Ihedioha (filed in Jan 2020) that Uzodinma’s appeal should be dismissed because the S/C already found Nwosu as the candidate for APC while also representing AA. And that as such Nwosu cannot represent two parties.

So if Nwosu was APC candidate; how can Uzodinma too represent the same APC? The S/C rejected this motion because, it is “a Pre election matter” and that it was not raised by PDP in the lower court. But the S/C ruled on the Nwosu matter only on 20-12-2019.

So how could Ihedioha or PDP have raised this as an issue prior to the verdict of the S/C? This decision of the S/C was technically correct but Equitably WRONG in my view. So APC legally had two candidates at the election. That is a matter equity will always frown at.

2. On the substantive case of the results from the polling units excluded in the previous result; I will agree fully with the S/C verdict that Uzodinma was unfairly treated by the lower courts.

If INEC claimed the results presented by the police on behalf of Uzodinma were fakes; how come INEC never produced the Original result? So, INEC messed up big time in this case. And the verdict, though hard to swallow for PDP appears sound and plausible.

Alternative results was never presented by INEC for those polling units; & INEC never claimed voting did not take place in those units either. So d court was right to accept Uzodinma’s presented results. So I agree with d logic of d judgement but d blame is entirely that of INEC.

3. S/C was also right in distinguishing this verdict from Atiku v Buhari in that since there was no dispute that elections took place in those units; there was no need to call each polling officers to give evidence as determined in Atiku’s case where irregularities were alleged.

So INEC agreed with Uzodinma that elections took place in those excluded polling units; yet INEC could not present official results from those units to counter that presented by Uzodinma. So the court’s thinking here is valid. INEC again failed in its duty.

4. Finally, the S/C was silent on the issue of wether the total number of votes (after accepting Uzodinma’s results in the 388 polling units) is more than total accredited voters at the election. They were completely silent on this mathematical issue. I found this challenging.

This is why I belief the court should have ordered a fresh election as a way to satisfy equity in this case. Simply handing it to Uzodinma is problematic in my view; although I also accept that Ihedioha’s victory was rightfully voided (no thanks to the mess caused by INEC).
I am satisfied that the decision of the S/C is within the Band of Reasonable responses possible in this case although I would have preferred a fresh election to put matters beyond any doubt.

But the verdict of the learned Justices is not totally perverse as some (including myself) may have feared. I thank them for putting INEC on the spot for doing a terrible job in Imo state.

Clearly I have tried to distil complex legal terms into simple summary. So I may have missed a few things I am sure others will add to the debate. This is my take and unlike the supreme court; I am fallible.