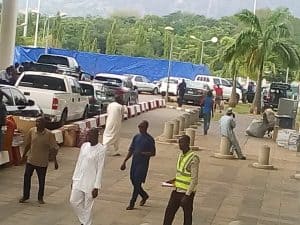 About  3, 000 legislative aides who served during the 8th National Assembly between 2015 and 2019 are eagerly awaiting the  payment of their severance benefits which may total about N8 billion.

Some of them are already seeking fresh appointments with the newly inaugurated Senators and Representatives.

The Revenue Mobilization Allocation and Fiscal Commission in its  Remuneration Package for Political, Public and Judicial Office Holders, Senators, members of the House of Representatives and many of the legislative aides recommends payment of 300% of annual basic pay to them as severance entitlements.

Each of the 109 Senators and 360 House members has five legislative aides, totalling 545 and 1, 800 respectively or a cumulative total of 2, 345 who are collectively entitled to varying amounts that add up to well above N8 billion.

The additional perks of Principal Officers in both the Upper and Lower Houses includes a large number of additional aides serving as Chiefs of Staff, Advisers, Special Assistants and others  and severance packages are to be paid to them too.

According to dependable sources at the National Assembly, the severance benefits for Senators and members of the lower house have been finalised while a special committee  which is working on those  of the legislative aides is about finalising details so that legislative aides can be paid before the end of next month.

Their bosses who served as Senators and members of the House of Representatives, including those who were re-elected already had part of their severance benefits, totalling about 300, 000 to 400, 000 deducted for payment on ‘depreciated asset and equipment’ such as television sets, refrigerators, computers and so on.

According to a National Assembly official who requested anonymity what aide will receive will depend on his Salary Grade Level and the number of years spent serving his principal.

On Tuesday, April 23 this year, the Chairman, Senate Committee on Appropriation, Senator Danjuma Goje revealed that former lawmakers in the National Assembly allocated N23.7 billion for settlement of the severance pay of federal legislators in the 2019 national budget out of the N125 total allocation for the National Assembly.

Goje said  the decision to increase the N8.826 trillion 2019 Appropriation Bill brought before a joint sitting of the National Assembly by President Buhari on December 19 , 2018 to N8.916 trillion, to accommodate some new items including N23.7 billion for settlement of severance, inauguration plans for incoming legislators and other items.

“There is a slight increase in the budget deficit. This is as a result of the provision for severance benefits of the outgoing legislators and legislative aides, the induction/orientation and inauguration of new legislators, all of which occur once in four years, but were inadvertently not captured in the 2019 budget proposal,” Goje stated. .

However, the huge  expenditure is only following the usual norm and the guidelines legitimized since 2007 by the Revenue Mobilization and Fiscal Commission (RMAFC) under which the lawmakers and their aides’ severance gratuity package is arrived at by calculating 300 per cent of their annual basic salaries.

The Nation gathered that some of the legislative aides who served between 2011 and 2015 are still in court, demanding legal intervention to compel the National Assembly to admit short changing them by paying a severance package calculated at 200% of annual salaries instead of 300%. In accordance with the RMAFC’s Remuneration Package for Political, Public and Judicial Office Holders, Senators, members of the House of Representatives are to receive 300% of annual basic pay.

With 109 Senators, the total package for Senators’ severance benefit is N2. 1 billion while the total for members of the House of Representatives amounts to about N 7 billion.

One source said: “The severance benefits of Principal Officers in the two Houses, especially the Senate President, Speaker and their Deputies are in an entirely special class.

“For instance, the norm is that the Senate President or Speaker leaves with almost the entire six to eight classy cars in his car pool, leaving one big bullet proof Mercedes Benz which his successor is likely to replace anyway.