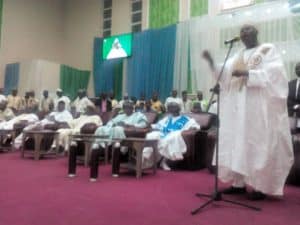 The Executive Governor of Kano State, Engr.(Dr) Abdullahi Ganduje said he was robbed of victory in the PDP gubernatorial primaries  election of 1999, the victory that translated to the final PDP governorship victory and produced Senator Rabiu Kwankwaso as the state governor in 1999.

Governor Abdullahi Ganduje made this full disclosure as part of other numerous revelations in hausa, his mother tongue to the mammoth crowd that gathered in the Kano Coronation House at the Government House late yesterday in Kano.

Ganduje who was applauded by a large crowd comprising of political big wigs, women and youth explained that those mastermiders used executed their nefarious rigging plot at Gabasawa local government area of the state after which the then top level stakeholders of the party PDP, decided to compensate him with the position of deputy even against the will of the state governor which he became.

Ganduje said, ” To open up to you, at the inception of the third democratic dispensation in 1999 and emergence of People’s Democratic Party (PDP) as a  ruling party at the federal level and in kano state, I Ganduje won the then PDP gubernatorial primaries in 1999 but was rigged out in Gabasawa by over jealous politicians who are all in our All progressive Congress (APC) party today. They Later came up and apologised to me, seeking for my forgiveness and I told them, I have forgiven you, that it was God’s will”.

“When our the party, PDP finally won the governorship of the state, I was selected as a compensation to be the deputy to senator Kwankwaso as the Governor of kano state by the party top stake holders not because the leader of the state wanted me to be the deputy but because he was compelled to appoint me as the deputy and I shown contentment and waited for 16 years before I finally become the state governor today by the will of God”.

He however commended another former governor of the state, Mallam Ibrahim Shekarau whom he said suffered unwarranted political political persecution under the same administration of Governor Rabiu Kwankwaso that he was a deputy.

Mallam Ibrahim Shekarau whom he described as a honest, incorruptible, hardworking and a man of contentment was said to have been unduly tormented, disgraced and degraded by his  boss from a position of permanent secretary to a class room teacher only to resign later, contested for governorship under an opposition ANPP party and displaced his party PDP from power in 2003.

“When I went to persuade Mall. Ibrahim Shekarau to come to APC with me, he agreed without conditions but I told him, I will receive him with conditions, that if he like, let him come, if he like, let him stay where he is but there is no future there. I told him, my condition is that when you come, you are going to contest for senate for kano central then he said for the first one, I accept but for senatorial election, what of other contestants?. I said leave that one for me, we I’ll resolve it which we did without coercion”.

He therefore  applauded the former governor of the state, Mallam Ibrahim Shekarau who he said share the same dreams, contentment, focus and deep concern for the infrastructural and socio economic development of the state.
END.

Onnoghen:Buhari has shown Nigeria is no longer a democratic country- Senate President