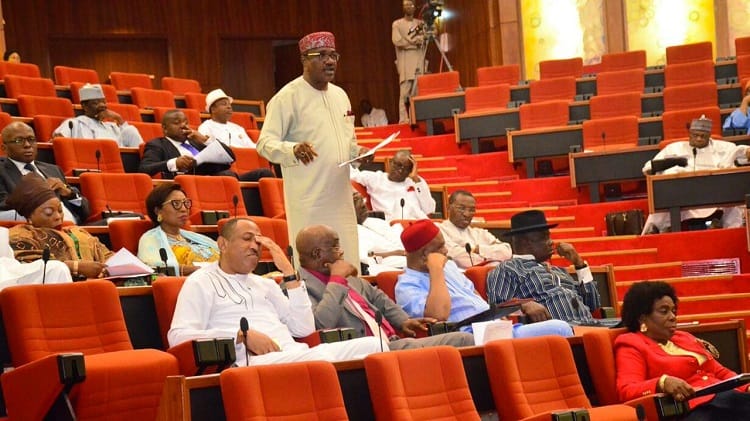 by Ihegazie Hope Chidinma
Senator representing Imo East, Onyewuchi Ezenwa Francis has urged the Federal Government to revive palm oil industry in Nigeria.
Francis made this call in a motion he raised concerning the state of palm oil industry in Nigeria which was seconded by senator representing rivers south east, Mpigi Barinada and senator representing Lagos west, Adeola Solomon on Tuesday 23 July, at the national assembly, Abuja.
He explained that before the oil boom in the mid-1970s, agriculture was the mainstay of Nigeria’s economy, in the 1950s and 1960s, Nigeria was the largest producer and exporter of palm oil, controlling close to 40 per cent of the global market share.
He further disclosed that the discovery of crude  oil in commercial quantity paved the way for the gradual neglect of agriculture by successive governments, adding that as a result of this neglect, palm oil production has fallen to 1.7 per cent, which is inadequate for local consumption.
” are you aware that several stakeholders and agricultural experts have identified the development of palm oil as one way the country could diversify the economy and generate foreign exchange for development”.
” the neglect of palm produce in Nigeria brings to mind the fate suffered by other cash crops which has made it difficult for the country to achieve her set target of diversifying the economy from the current oil- reliant status”.
Francis therefore expressed his concern that if Nigeria refuses to harness the full potentials of the oil palm industry as an economic opportunity, that it will continue to fall behind other global economies.