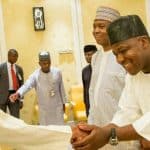 Today, he has added another eventful year. Another year of service to God and country. His is a life full of purpose. Indeed, a life of service to humanity.

The Speaker clocked 50 years last year and for the first time in his adult life, celebrated his birthday. Last year’s event was not a celebration of himself but an avenue to renew his commitment to serve humanity, assist the needy and re-dedicate himself to that noble cause of ‘being our brothers’ keepers’ with the launching of the Yakubu Dogara Foundation.

The man, Dogara, is a natural born leader whose sterling qualities are exceptional. He is one man who grew steadily through hard work, discipline, prudence, fear of God, honesty and can best be described as a bastion of hope, courage, and an epitome of humility to anybody who comes close to him.

The House which he leads has been peaceful and busy discharging it’s constitutional responsibilities effectively and under his able leadership, has achieved many firsts.

It has set unprecedented records of achievements in Nigeria’s legislative and political history since independence in 1960.

Notable among the many salient achievements; 300 Bills have been passed so far, over 1000 resolutions touching many aspects of our national life considered and passed, and hundreds of public petitions from ordinary Nigerians treated and addressed.

Though by convention, presiding officers don’t sponsor bill or motions, Hon Dogara waved it aside and personally sponsored more than 10 Bills and became the first speaker to sponsor a motion on the floor of the House in addition to his advocacy on independence of the local government from the claws of the states.

In the last three and half years, he has continued to offer succour to millions of Internally Displaced Persons visiting various camps across the country and used every opportunity to draw the attention of the world to the plights of the people of the region. Only last week, he reiterated the call for the convocation of an international donor conference for the reconstruction and rebuilding of the North East.

His brainchild, the North East Development Commission, though, legally created, retrogressive forces have been frustrating it’s constitution one-year-two-months after the Bill was signed into law by Mr. President. The speaker recently called on the President to constitute the commission so as to commence the work of rebuilding the violence ravaged region with immediate effect.

He was the first high ranking public officer to raise the alarm over the rising spate of insecurity in the country which saw to the deployment of military in 32 out of 36 states of the federation in a democracy instead of the Police, an anomaly which he argued, poses great danger and threat to the survival and sustenance of Nigeria’s democracy. Today, because those whose responsibility it was to act, ignored these warnings, the problem has worsened and insecurity has engulfed virtually every part of the country.

To his credit, the House also introduced the Sectoral Debate which was the first of its kind in our legislative history, held special sessions on urgent national issues, including but not limited to the revival of the moribund and abandoned Ajaokuta Steel Company Limited, which saw to the passage of two Bills in that regard.

Recall, he made history as the first sitting speaker to embark on an oversight tour when he visited Ajaokuta early in the year. The Ajaokuta community came out in their numbers to receive Hon Dogara and his entourage where they rolled out the drums in celebration. But for his effort, Ajaokuta Steel Company Limited would have been gone by now because unpatriotic and undesirable elements in the government had already mortgaged it in return for a morsel.

The legislature, which is the nucleus of democracy, is hardly appreciated in Nigeria. Many have adduced reasons for this which include prolonged military rule but primarily it is because the work of the parliament is intangible and as such many don’t see it but history and posterity will do justice to the 8th Assembly under the leadership of Yakubu Dogara.

One thing that keeps baffling me about him is his large heartedness. His spirit of forgiveness and accommodation is outstanding. I have never ever seen forgiveness at the level at which he does it and many a times, I do wonder, how?

Sometimes, when he takes a decision to let go or forgive; people around him would go away murmuring but later, things would happen and then the wisdom in his decision comes to the fore.

During the Speakership election, those who thought they control the power of life and death, the power to enthrone and dethrone; the power to give ‘crown’ and allocate positions, the power to whom they wish had vowed that he will never be the chosen one.

Infact, they rebuffed all efforts and attempts by well-meaning individuals to negotiate and reach a common ground but God, yes, the Almighty God, works wonders and He did it on June 9, 2015. Yet, instead of accepting and surrendering to the will of God, they continued to plot against him but the same God who neither sleeps nor slumber, the God of Abraham, Isaac and Jacob, the one and only God saved and protected him from the snares of fowler and noisome pestilence all the way.

I can recall that when the party requested that he concede the House Majority Leader and other principal positions, close associates, friends and aides alike resisted.

However, it was his conviction that leadership is not a zero sum game and being the man of peace that he is, who believes in the politics of give-and-take and consensus building, the speaker obliged the request.

The day he announced the concession on the floor of the House, they were all sad. It was one singular decision that didn’t go down well with his supporters but he stood his ground and pleaded with them to sheath their swords and let peace prevail.

However, despite that concession, those who thought it was their birth right to be, continued to plot against him. To my knowledge, on at least three occasions, they plotted and failed woefully, which provided ample opportunity for their axing but he would not. He forgave and moved on. On one occasion, I overheard a close ally lamenting that if it were him, he will never let go because he is not Christ so he won’t forgive. But that is the man, Dogara, for you and today as they say, it is history.

Humility. Yes, humility is his defining character. Barrister Dogara is humble to a fault. God-fearing, gentle, peaceful, generous; yet unassuming and exceptionally intelligent, a natural orator and never pretentious. For anyone who knows Dogara, these things are easily discernible about his character-humility, intellect, courage and a calm spirit.

These same qualities were said of Sir Abubakar Tafawa Balewa of blessed memory and today Dogara who comes from the same place as the man who was referred to as “the golden voice of Africa” is following in his footprints but he would openly admit that he was no where close to the highly respected Nigeria’s first and only Prime Minister. I have come to learn and appreciate these qualities and characters and to this lawyer of high repute, erudite scholar, family man and a devote Christian, I say, happy birthday, Sir.