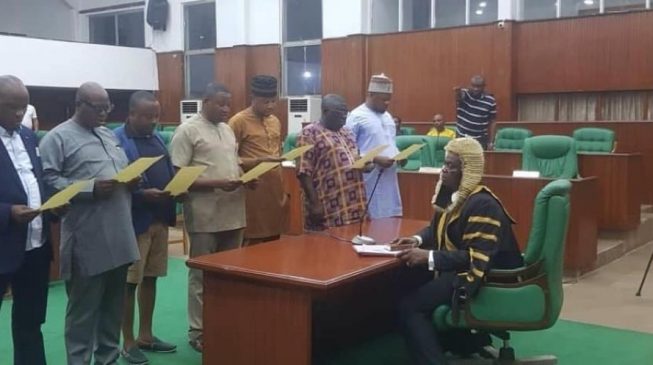 Nine Edo house of assembly lawmakers said to be loyal to Godwin Obaseki, the governor, edged out their colleagues  by taking oath of office “secretly”.

They were sworn in shortly after 15 others protested the delay in inaugurating the assembly, blaming it on an attempt of the governor to impose his loyalists as presiding officers.

Led by Julius Osifo, a former commissioner in the state, the lawmakers-elect gave Obaseki a seven-day ultimatum to give proclamation for a new assembly.

A legislative source told TheCable that a “cold war” between Obaseki and Adams Oshiomhole, his predecessor, has split the assembly into two.

Oshiomhole, who is chairman of the ruling All Progressives Congress (APC), was said to have been perfecting strategies to oust Obaseki since he had majority of the lawmakers in his camp.

“Up until yesterday, Oshiomhole had 19 lawmakers behind him while the governor had five,” the source said.

“But after the lawmakers loyal to Oshiomhole gave the governor a seven-day ultimatum to inaugurate the assembly, his camp reached out to five legislators who were on the side of the APC chairman and with this, they were able to form quorum for inauguration.”

The source said after enlisting the support of nine lawmakers, Obaseki transmitted a letter of inauguration to Audu Omogbai, clerk of the house, who ushered the lawmakers into the chamber immediately.

Proceedings were said to have commenced under heavy security and Frank Okiye, Obaseki’s preferred candidate, emerged speaker while Yekini Idiaye of Akoko Edo constituency I was elected deputy speaker.

Okiye said other elected lawmakers who were not at the “inauguration” would take their oath of office after completing their documentation processes.

“I am not the best, but this responsibility is divine,” Okiye who represents Esan north-east 1, said in his inaugural address.

John Mayaki, chief press secretary to the governor, did not respond to calls and text messages as of the time this report was filed.

Simon Egbebulem, spokesman of Oshiomhole, could not also be reached for comment.