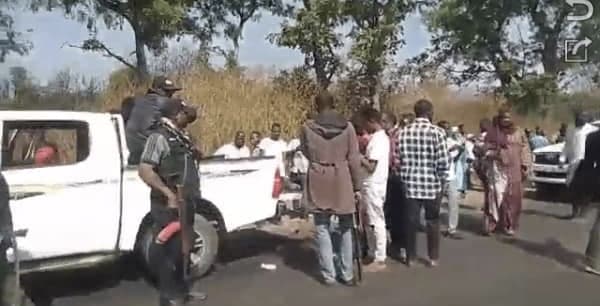 There was a mild drama in the floor of the Katsina House of Assembly on Wednesday as the Deputy Speaker, Mr. Shehu Tafoki went emotional and wept bitterly while lamenting about the insecurity in his constituency.

EyewitnessMedia gathered that Mr. Tafoki, after getting the nod to address his colleagues about the spate of crimes in his Faskari constitueny said that, “The area has borne the brunt of bandit attacks, kidnappings and general insecurity.

“Last week, five people were killed, a divisional police officer shot and a council chairman kidnapped in multiple attacks on Faskari and Sabuwa.”

Tafoki at the House’s special sitting on insecurity in the state said hardly a day went by without reported attack across the area saying that many have been killed, maimed and kidnapped.

According to him, Faskari local government can now be compared to Maiduguri, saying, ” Even last night these bandits attack Daudawa where they kidnapped four people and injured many.”

Aside from his trembling voice which showed the brokenness in his heart, tears kept on rolling from his eyes which made him to end his presentation abruptly and return to his seat.

Earlier, several members of the Assembly lamented the situation in their respective constituencies.

Mr. AbdulJalal Runka (Safana) pleaded for a rollback of the lockdown in the area to enable his constituents, who are daily being attacked escape the bandits attacks.