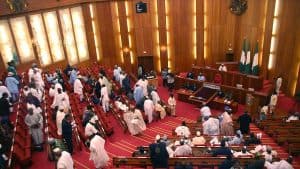 Senate President, Bukola Saraki, openly admitted, on the day the curtains fell on the Eighth Senate, that either Ali Mohammed Ndume, or Ahmad Ibrahim Lawan, will succeed him.

At different times, Ndume and Lawan were Senate Majority Leader.

Saraki disclosed this during the valedictory session of the Eighth Senate, yesterday.

“You have made your mark here and the record reflects it. I also thank former majority leader Ali Ndume; you also made your mark.

“Between the former majority leader and the current one, it is clear that one of you will be president of the senate.

“Whoever emerges, I wish you the very best of luck.

“This I know: whatever the capacity, we should always do our best to serve the interest of the people. We should also have it at the back of our minds that power is transient…

“Distinguished colleagues, let me thank each and every one of you for your contributions towards making this the historic senate that it is.

“When I think of the many trials and tribulations we have faced as an institution, and my own personal travails particularly at the Code of Conduct Tribunal, I am humbled, because none of our achievements would have been possible without the support and cooperation of the entire members of this chamber.

“The pieces of legislation we passed in the crucial areas and areas affecting the daily lives of citizens–on the economy, in education, security, anti-corruption, health and so on – will remain a benchmark.

“Working together, we clocked many firsts in the Eighth Senate, and we should rightly be proud of these, especially as they are imperishable legacies we are leaving for the people.

“It should be a matter of pride to all 109 senators and to our offsprings that, in this chamber, we put humanity first.

“I will always be proud of the humaneness of the Eighth Senate.

“Whenever the situation demanded, we left the imposing edifice of the National Assembly to reach out to the person on the street.

“We showed that parliament belongs to the people and that there should be no barrier between lawmakers and those they represent.”

Lawan is the choice of President Muhammadu Buhari and the leadership of the All Progressives Congress (APC) but Ndume has refused to withdraw from the race.

Earlier, senators touted their achievements and recalled their highest and low moments.

Lawmakers, who spoke in turns during a six-hour exercise, recalled some of their high and low moments and also, recalled some trying moments when the independence of the parliament was under trial.

Saraki said only God gives power and gave a glimpse of he survived attempts to oust him, because he stood on the side of the people, as against forces who wanted to cage and undermine the independence of the judiciary.

He said: “The invasion of the National Assembly by armed security operatives in August 2018 will live in infamy.

“This way down the line, however, I realise that the day of that invasion was the saddest-but, in many ways, it was also a good day for asserting the independence of the legislature and the triumph of democracy.

“It also turned out to be a showcase of the special relationship between this chamber and the House of Representatives, as honourable members stood in unison with their Senate colleagues; in defiance of the invaders.”

His deputy, Ike Ekweremadu, recalled how the Eighth Senatetook off on a shaky note.

He said the parliament, despite the pressure, stood on the side of the people.

Said Ekweremadu: “We started this senate in 2015 on a divided note. We were too divided. There were groups, then. Today, we are more united.

“Our loyalty was to the people of Nigeria. There were plans to overthrow the leadership of this Senate. But, we stood together; despite our different political divides.

“Several attempts were made to destroy our activities. They stood their ground. Some of us were imprisoned. The last four years have been eventful, despite the distractions.

“What has happened must be a lesson. History has a way of repeating itself. We must learn that all power belongs to God. Only God gives power. We must be aware of this fact. For those coming back, they must learn from their mistakes.”

Former senate president, David Mark, in his remarks, called on lawmakers, especially the incoming Assembly, to always work in the interest of keeping the country as one.

He said: “In the last 20 years, I was on the floor here. I spent the last one month going round my senatorial district and thanking them.

“We have made our mistakes in the last 20 years.

“I hope that the lessons we have learnt will move us forward.

“We must develop democratic institutions, instead of creating strong individuals. Institutions will last for years. I hope a day will come when we will vote and the votes will count.

“I look for a day when campaigns would be issue-based. Constitution amendment is a continuous exercise. We will continue to amend our laws the military gave us.”

Minority Leader, Biodun Olujimi, called on the next Assembly to assert its independence and resist any attempt to cage it and make it a stooge to any arm of government.

On his part, Kabiru Garba Marafa said: “I will always remember Saraki as person that respects loyalty. I have disagreed with you. You attempted to suffocate and drown me. I never gave up. I did what I did not because I hate you. I disagreed with you. I am not a hypocrite. I appreciate Saraki for being who he is. In the days and years to come, Saraki will know his true friends.”

9th Senate: Ndume Speaks On Stepping Down For Lawan